The South Park Reel Chaos slot machine is a varied game that features the famous characters from the show, which each play their own role. This game is available in Casino Winner and players can decide how much money they want to bet per spin. They can change this amount after every spin, although that is not necessary. Players can keep playing for the same amount every time or even select the option to automatically spin the reels a certain number of times. The game features five reels and three rows, creating twenty win lines. 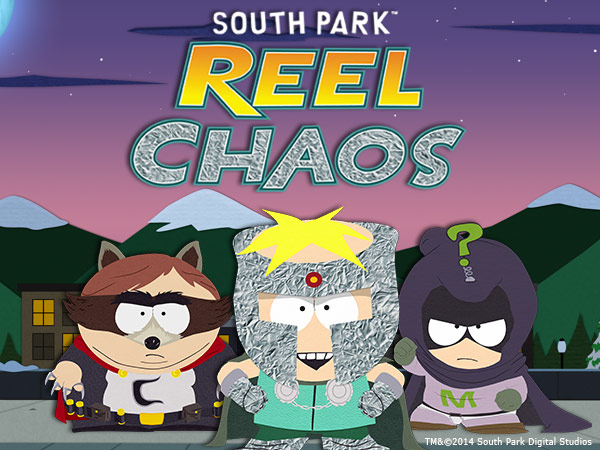 The South Park Reel Chaos slot machine stands out with its mini features that make the game even more interesting because they always give players a chance to win more money. In the game’s story, the South Park characters face off against Professor Chaos.

Just like many other slot machines, this game features wild symbols. A wild is a symbol that that appears instead of one of the standard symbols. This increases a player’s chance to win, because it can lead to more winning combinations. There are also other symbols unique to this game, e.g. the special Cartman stacked wild.

When General Dissaray appears on the screen, Cartman will fight him and climb up a reel before sliding down again. This will change the entire reel to wild symbols, which further increases a player’s chance to win because there will be at least three wild symbols in play.

Other wild symbols also exist. Kyle has to option to create an overlapping wild when evil minions appear. Kyle will scare these off and create between three and five overlapping wilds.

Players will often not win any money after a spin on the South Park Reel Chaos slot machine. That is too bad, but don’t forget that there is always a chance of activating Stan’s re-spin. The great thing about this surprise is that the multiplier can lead to even bigger winnings. All this can turn a losing spin into a highly profitable one.

Last but not least, there is the Mint-Berry bonus spin feature. This is a real bonus game that starts once the reels show three scatters. Of course, the South Park Reel Chaos slot machine’s many exciting features can activate during the free spin mode as well.